Welcoming 2016 with open arms as I look forward to showing you some new Stampin’ Up! products from the Occasions and Sale-a-Bration catalog. I will be linking the catalogs in the tab above. Now on to the Sweets!!

I LOVE Sweets!! I have a major set tooth that started when I was a kid and never went away! Of course the new year means some changes in my life and that includes less sweets. These sweets today are not edible but very adorable! They satisfy my sweet tooth in a different way. 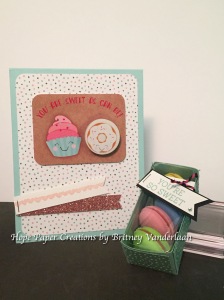 I found these adorable Valentine’s Day cards with cupcake and donuts as well as a pack of Macarons. The donuts and the macarons are erasers. So no calories here but lots of cuteness! The following two pictures are of them in their original forms before I added my creative touch.

I started with the cute Valentine’s Day card and donut eraser. I bought them to create thank you cards for my Origami Owl business. The little paper itself was flimsy so I knew I had to create a full size card with it. There are 30 cards and erasers in the pack. 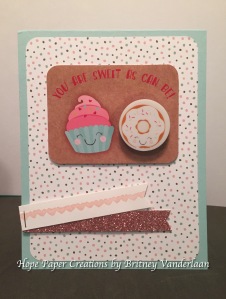 I trimmed it down to get rid of the to and from and to create smooth edges. I used the new Birthday Bouquet Designer Series Paper for a background layer. I stamped the heart border from the new Birthday Blooms stamp set in Blushing Bride. I then cut it down and added the flagged end. I cut a piece of the new Blushing Bride Glimmer Paper to be a little longer than the heart flag. Stapled those together and added Stampin’ Dimenionals to the back to add a little pop. Rounded the corners for both the designer series paper and the Valentine’s Day card. Then I added Stampin’ Dimensionals to the back of the Valentine’s Day card and put it top and center on the full size card.
What do you think? Cute right?!

Let’s talk Mint Macaron! Love the new In-Color from 2015-2017 so I had to use it for this project with the little macaron erasers. I took apart the box they came in and realized I could simplify it. So I cut, scored and put my new box together then put the macarons in and added the original clear top to it. 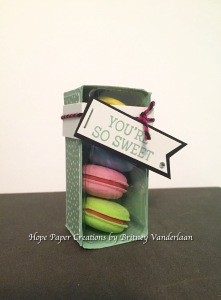 I knew I had to add a belly band otherwise it wouldn’t look complete. So I just cut a piece of Whisper White card stock and wrapped it around the box to figured out where it needed to be scored. Cut to length, scored, and adhered it in the back, but not to the actual box itself. Added a piece of the new Melon Mambo and Black Bakers Twine that comes in a combo pack. I thought maybe it was complete but then I realized it needed a sentiment. The sentiment came from a Sale-a-Bration stamp set called Honeycomb Happiness. The sentiment “You’re So Sweet” was perfect! Stamped it in Mint Macaron on Whisper White, added some Basic Black card stock to the back. Flagged the ends of both and stapled together. I added a Stampin’ Dimensional and a Rhinestone then placed it on the belly band. Now the project felt complete.

Too cute to eat? I hope so since these sweets are erasers, but they are a perfect little Valentine’s Day treat for anyone! These were located in the Target Dollar area in the front of the store. I hope you can find them at your Target or look for something similar at another store. 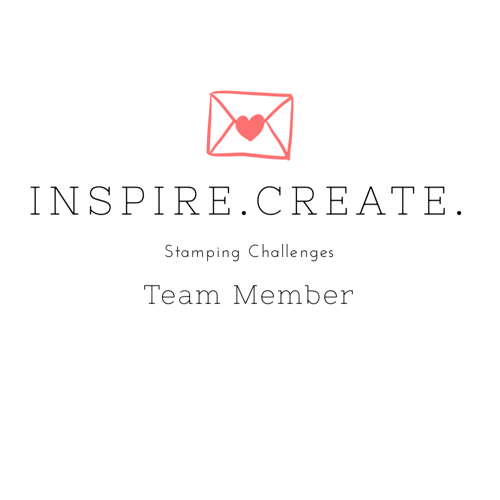 I’m a Stampin’ Up!® Independent Demonstrator.

Stampin’ Up!® does not endorse my website. This blog is my full responsibility.